One of the Best Groundcovers - Erigeron puchellus, Robin's plantain


I've sung the praises of groundcovers for years.

But it's hard to find the right groundcover - one that is assertive enough to spread and block weeds, but not so aggressive that it rampages over the landscape.

I tend to prefer and seek out native plants -- because I think they contribute to a 'sense of place', because I think they tend to fit into an intricate web of ecosystem services that I only dimly understand, and because I don't worry about messing up any wild spaces if the plants spread outside the garden.

Of course, I also want the plant to look good! Gardens should have aesthetic beauty too!

For a groundcover, I'd love to have an evergreen - something that's capable of tolerating Tennessee winters - multiple nights in the 20s, teens, even single digits. (It rarely gets below zero degrees Fahrenheit here, but it does happen occasionally.) And then something that can take hot, humid, droughty Tennessee summers without wimping out.

Surely if a plant filled all these criteria, it would be famous! People would be shouting its (slightly unwieldy) name from the rooftops, draping it with garlands and crowning it with honors.

In this case, hardly any seems to have heard of Robin's plantain (Erigeron pulchellus), despite the fact that it's native throughout much of the Eastern and Central U.S. and thus is probably growing (literally) right under our noses. Or our feet.

It's a lovely plant - splendidly fuzzy and touchable. Unlike that other fuzzy, touchable groundcover - lamb's ears (Stachys byzantina) it doesn't turn to mush in the winter. (It does get tattered, but I say tatters are better than mush.)

And the old foliage tends to decompose quickly on its own, again unlike lamb's ears, where the detritus just builds from year to year.

So far, I've only trialed Robin's plantain in partial to heavy shade. It seems to tolerate heavy clay soil just fine. It can even grow on a slope beneath an eastern red cedar in what must be pretty dry conditions (to put it mildly).

But I've found it easy to pull (unlike say exotic Ajuga) and relatively easy to transplant. It does seem to do best when transplanted in early-to-mid autumn -- past the heat of summer but with some time to settle in and put down roots before the real winter chill sets in.

Without further ado, here are some glamour shots of this lovely creature: 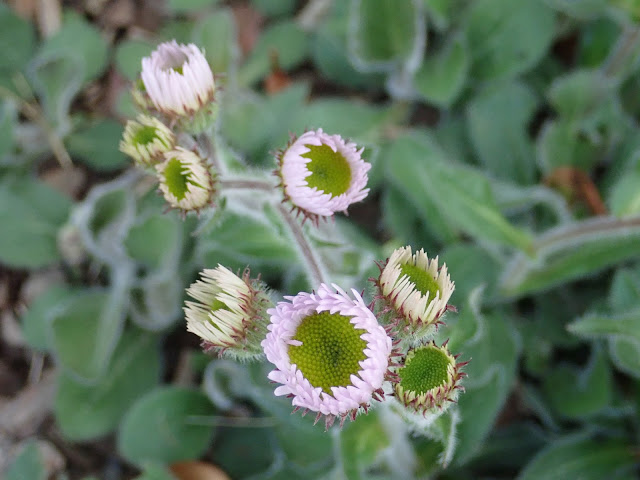 If you garden in the Eastern or Central U.S., you may be able to find Robin's plantain at a nearby nursery that specializes in native plants.

Otherwise, you could try ordering it from a mail order supplier. If you live in the South, I'd recommend Mail Order Natives. If you garden in the North, I'd suggest trying to find a supplier that would probably carry a more local ecotype.

Cultivated by Aaron at 8:00 AM

Need to add an image? Use this code [img]IMAGE-URL-HERE[/img]